The Many Atrocities Of The Nigerian Govt. Against The Afara-Ukwu Kingdom & Their Eze Israel Kanu

by Allnewsblogger
in Breaking News
0 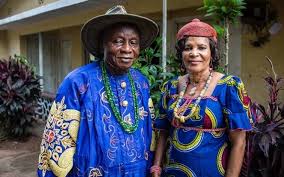 Onitsha, Eastern Nigeria, 12th Feb 2020–The human rights of members of the Human Family are fundamentally rested on: their rights to be born and identified or recognized as human persons in a particular cultural environment; exist, develop and live in secured or protected and habitable general envelopment. At natural or lawful death, their rights extend to rights to have their remains retrieved, interred or committed to mother earth and given befitting burials and funerals. These are covered by the four generations of human rights under UN System; namely: civil & political rights, economic, social and cultural rights and environmental rights.

The above was the position of the Int’l Society for Civil Liberties & Rule of Law as contained in a statement issued today and signed by Emeka Umeagbalasi (Chair of the Board), Anayo Okoli (Board Member) and Samuel Kamanyaoku (Head of Field Data Collection & Documentation)

Intersociety’s statement was in reaction to coordinated and sustained plans by the Federal Government of Nigeria and its ethno-religiously lopsided security agencies to violently disrupt the 14thFeb interment and funeral of the wife of the Traditional Ruler of the Afara-Ukwu Kingdom, Lolo Sally Ugoeze Kanu. Her husband, HRM Eze Israel Okwu, was also sacrilegiously declared ‘dead’ and fixed for burial same date.

As a matter of fact, under Divine Rights of the Kings applicable to all generational ages and kingdoms till date including Nigeria and Igbo Land, a reigning king does not die, but join his ancestors to continue living in the cosmic world. It is also a taboo for his death to be commonly announced. His passage is usually marked with ‘last Ofala festival’ or its equivalent, chiefly organized by the kingmakers.

Under the same ‘Divine Rights of the Kings’ operational in Nigeria and Igbo Land till date, the Palace of a King cannot be desecrated through acts of state violence or threats of same. The Palace of a King is kept holy and respected all the time same way churches and mosques are preserved and respected. These are on account of the divine principle that ‘kings/queens are the representatives of God on earth and divinely anointed to reign forever’ or till they joined their ancestors. It is still remembered that the Igbo Ethnic Nationality is the oldest Nationality in Nigeria, founded some 3,470years ago.

Contrarily, the present central Government of Nigeria has committed ‘many atrocities’ against the Kingdom of Afara-Ukwu and their Traditional Ruler, HRM Eze Israel Okwu Kanu and brutally desecrated their Land. The Afara-Ukwu Kingdom is in Umuahia North Local Government Area of Abia State in Eastern Nigeria. The atrocities committed in the ancient Kingdom by the Government of Nigeria are unspeakably unheard of, and have never been visited on any royal Palace of an Oba in the Southwest or Emir in the Northern Muslim Nigeria.

It is therefore recalled that the ancient and peaceful Kingdom of Afara-Ukwu was first visited with unprovoked and egregious attacks by the Nigerian Army in Sept 2017. The threats of the attack started on 8thSept 2017 leading to full scale and war-like Army invasion on the Palace and residence of Eze Israel Okwu Kanu, his family and the entire Afara-Ukwu Kingdom 14th Sept 2017 during which no fewer than 105 unarmed, nonviolent and defenseless Igbo citizens were shot at close range and killed. Not less than 60 others were also shot and critically injured with scores crippled for life. No single soldier was killed in the attacks. This was because the attacked were unarmed, defenseless and helpless.

In the hallowed or benevolent Igbo Kingship system, this is monumentally sacrilegious and abominable; requiring thorough cleansing and justice against the perpetrators; else the ancient Kingdom will generationally be thrown into a ghost town and endless spiritual tormenting. This is because it is not only that over one hundred souls were massacred in the ancient Kingdom by the Nigerian soldiers, but they were innocent and unarmed; massacred during their peaceful assembly in solidarity with Nnamdi Kanu, their leader and biological son of the respected Traditional Ruler of the Community. Killing of innocent souls constitutes the highest crime and abomination in the Igbo Traditional and Kingship Society.

The most undoing by the Government of Nigeria and its sacrilegiously composed security agencies is that as against all known legal provisions and ‘rules of engagement’ in civil-military relationship or policing, many bodies of those killed during the grisly attacks were taken away by soldiers and thrown into the bush to decompose without traces or identification; or decimated with raw acid substances in shallow graves to evade traces and justice. Scores of those shot and injured and rushed to clinics by sympathizers; were also traced to their clinic beds, abducted and possibly killed. The Government further acted abominably by declaring both group and individual victims as ‘terrorists’.

Considering the old ages of Eze Israel Okwu Kanu and his wife, Lolo Sally Ugoeze and vulnerable health conditions that follow same, the grisly war-like or gun attacks by the Nigerian Army at their Palace and ancestral home are likely to have caused the untimely joining to his ancestors of HRM Eze Kanu and death of his wife. Though it is unclear whether they sustained bullet wounds during the attacks, but it is certain they were traumatized and psychologically tortured. If these turned out to be true, then the Government of Nigeria and its sacrilegiously composed Nigerian Army led by Lt Gen Yusuf Tukur Buratai are liable and shall be held to account when appropriate.

The Nigerian Army ordered by the Government of Nigeria committed abomination and sacrilege by invading and violently attacking the Palace of Afara-Ukwu Kingdom and ancestral home of Eze Israel Okwu Kanu and his family. It is also both a taboo and an abomination to massacre over one hundred innocent and defenseless souls at a peaceful and sacred traditional kingship Palace; thereby turning the Kingdom into ‘a kingdom flowing with innocent blood and tears’.

In matters of legality, the atrocious acts of the Government of Nigeria and its Army totally defied constitutionality and legality. The Army monumentally acted unconstitutionally and ultra vires. This is because Mr. Kanu who was on a Federal High Court bail owing to spurious high crime charges against him ought not to have been targeted by soldiers for attack. Nigerian Army is neither the Court nor the Nigeria Police Force. Even if Mr. Kanu had violated his bail conditions, the Federal prosecutors know what to do both in law and in practice. In a serious minded democracy, the Nigerian Army Chief should have long been fired and sent to jail.

Nigerian Government Has Continued Its Atrocities Even In Death

The Government of Nigeria is still undone and unrepentant over the atrocities it has despicably committed against the Afara-Ukwu Kingdom and their Traditional Ruler, to the extent that the atrocities are being perpetrated even after the King’s departure and death of his wife. The Abia CP’s ‘good morning, afternoon, evening and night salutations’ to the People of Abia State are ‘war of words’ and threats and moves to militarize Afara-Ukwu Kingdom and scuttle the royal funerals.

He knows no other job in Abia State except “issuance of threats against IPOB and Mr. Nnamdi Kanu’s royal parents’ funerals’. As a matter of fact, the Federal Government has totally disrupted and destroyed the funerals; thereby sacrilegiously depriving the victims’ families and the entire Afara-Ukwu Kingdom their rights to give their royal King and Lolo befitting interment and funeral including receiving friends and well-wishers from far and near.

By our checks, many notable persons are likely not going to attend the burial and funeral for fear of Federal Government threats while some said they might attend only church service if conducive and return to their bases from there. A cross section of them who shared their views with Intersociety said that the lopsidedly composed Federal security forces may likely open fire on them and others during the funerals and tag them “armed IPOB terrorists”. The Afara-Ukwu Kingdom and its kingmakers, as a result, have totally been thrown into state of fear including threats of state violent attacks.

The referenced media war of words is not only unnecessary but also escalates the tensions and concerns regarding the funerals, capable of leading to chaos and bloodletting at the instigation, coordination and perpetration of the Nigerian security forces particularly the soldiers of 144 Battalion and the Abia State Police Command. The war of words also has capacity to endanger the security and safety of the mourners including the Afara-Ukwu kingmakers in whose responsibility the kingly funeral rites are exclusively entrusted.

Granted that the leader of IPOB, Mr. Nnamdi Kanu is the biological son of the just passed King and his wife and heir apparent to the throne (if the stool is still not rotational); but the funeral rites of the King are to be exclusively performed by the Afara-Ukwu Kingmakers (i.e. Ndi-Ichie/Eze-in-Council and other royal men and women) as well as the Abia State Council of Traditional Rulers or ‘Ndi-Eze’. IPOB, like other social groups known and friendly to the family can attend in their private capacities.

The Government of Nigeria through the Minister of Information and Culture is hereby called upon to address a world press conference tomorrow (13thFeb) calling the Nigerian Army and the Nigeria Police Force to order and directing them to withdraw all their armed personnel and armaments from all parts of Umuahia particularly the roads or routes leading to the ancient Kingdom.

The Government must further undertake the responsibility of publicly assuring the mourners including the Afara-Ukwu kingmakers and notable personalities and groups of their maximum security and safety during the funerals. Mourners from all walks of life wishing to mourn the royally departed husband and wife must be allowed to mourn them under circumstances devoid of state threats and violence. Anything short of the above, the Federal Government of Nigeria and its drafted security personnel and their leaders shall take full blames and be held liable.